In the heat and confusion of fierce fighting, it is very easy to forget about the rules and protocols of the Geneva Convention. And even after some semblance of peace returns with the stretcher bearers and the burial parties, the POW and particularly their wounded, still have to face the rigours of evacuation and transport out of the battlefields to their places of incarceration.

The struggle for supremacy of the Mediterranian was a desperate one, each side trying to cut off supplies reaching the other, with each side closely monitoring the shipping movements of the other. The basic stategy was to destroy the means of transportation. What was being transported was of minor consequence. 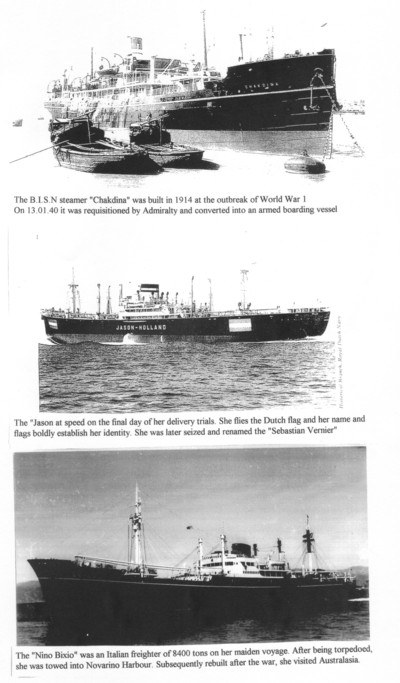 The B.I.S.N. steamer "Chakdina" was built in 1914 at the outbreak of WW1. On January 13, 1940 it was requisitioned by Admiralty as an armed boarding vessel.

In company with another similar vessel, the cased petrol carrier S.S. "Kirkland", it was returning from a supply trip to Tobruk back to the 62nd General Hospital in Alexandria with some 300 British wounded and 100 prisoners including the German general, von Ravenstein, on December 5, 1941, when at 21.35 hours at 32.11N and 24.30E it was torpedoed by the German submarine U.81 commanded by Lt. Cmdr. Guggenberger (1).

There are however eye witness reports that the ship was actually sunk by torpedo-bombers. Peter Bates, a New Zealand journalist then serving with the Supply Company of the New Zealand Division was on the "Kirkland". in his book "Supply Column" (M37) writes: "At 9.30 pm there was a sudden shout on board  the "Kirkland", a swirl of movement as the crew rushed for the freighters ack-ack protection - 12 m/g's plus a Breda - and the ship began to spit fire into the sky. Then there was another heavy explosion and another shout: "The bloody "Chakdina's" gone".

The "Chakdina" - 100 yards away across the moonlit water - was sinking after having been hit by a torpedo. In three and a half minutes the water had closed over her. Then there was another explosion and the sea boiled as the boilers burst. Of the 381 on board, few below escaped and others were drowned when the fast sinking ship dragged them down. 17 Australian POW were drowned including 12 members of the 2/13th Inf Bn.

Peter Bates is of the opinion that the torpedo was released by German aircraft. Some 200 survivors were rescued by the British destoyer H.M.N. "Farndale" and another 60 by a Norwegian whaler "Thorgrim".

Rowland Ryder in his book "Portrait of a German General" (M27 p106) states that Von Ravenstein said when rescued that the "Chakdina" had been attacked by an Italian Savoia torpedo-bomber.

A few days later, on 9 December, 1941, the "Sebastiano Veniero" (formerly the Dutch "Jason") with 2,000 POW among her cargo, was torpedoed by the British submarine "Porpoise" and was subsequently beached off Novarino.

Over 500 British POW were killed when the torpedo struck the forward hold in which they were crammed, including 45 New Zealanders. A graphic description of this tragic event is told by Spence Edge and Jim Henderson in their book "No Honour -No Glory" (M21) which also covers the story of the "Nino Bixio".

In each case, MK signals (signals extracted from decrypted enemy coded "Z" signals by Naval Intelligence through Bletchley Park) had been sent out by the Mediterranean authorities that POW were being carried. Neither submarine commander, German or British seemed aware of this fact, or if so, were not deterred from their primary wartime task, which was to sink enemy ships. The ships were certainly not marked as Hospital Ships.

In mid-August 1942, some 6,000 POW began embarking in two ships in Benghazi harbour for the journey to captivity in Italy. The two ships were the "Sestriere" and the brand new "Nino Bixio".

The embarkation procedure was such that those POW from A-L were allotted to the "Sestriere" and those from M -Z to the "Nino Bixio". By August 16, loading was complete and the two ships left Benghazi Harbour. They were escorted by two destroyers, the "Da Rocca" and the "Saetta" and two motor torpedo boats. Neither ship was marked as prison ships, or carried Red Cross identification or lettering. Again the Mediterraean authorities were advised that the ships carried POW.

On that same day, the Royal Navy submarine "Turbulent" (formerly named the "Trieste") commanded by Lt. Commander "Tubby" Linton, VC, was on patrol off Novarino. About 3 o'clock that afternoon, it sighted the convoy and despite its strong protective cover, "Tubby" Linton attacked, with a salvo of three torpedoes narrowly missing the "Sestriere" but hitting the "Nino Bixio" in Number 1 hold forward, in the engine room amidship and glancing off the rudder, but doing enough damage to render it useless. No. 1 hold was crammed with Allied POW, in the main Australian, New Zealand and South African and the torpedo burst through the skin of the ship and exploded inside. Less than half of the 300 men in this hold survived. The 2/28th Infantry Battalion of the AIF lost 29 men alone from the 39 Australians killed. 118 New Zealanders died.

The survivors were kept on the ship for four days to carry up as many dead as practical and to identify them if possible. During this period a few Italian army biscuits were their only food, but, as a survivor put it, "everyone was too dazed by the shock to worry about food". Of the 201 Australians on board at Benghazi, 37 were killed or drowned. After a short stay at Corinth, the uninjured were shipped to Bari in Italy, where they entered Campo 75, then being used as a main transit camp for British prisoners from North Africa.

The "Saetta" took the stricken "Nino Bixio" in tow and beached her in the harbour at Navarino. Wounded survivors were taken off, but the last were those physically uninjured Australian and New Zealanders kept behind for some days to "tidy up".

In the 12 month period of December 1941 - December 1942, six ships carrying a total of nearly 7,000 POW en route to Italy from North Africa were sunk, as shown in the following table:

The Recorder's memories of the torpedoing of the "Nino Bixio" have been surpressed and have faded over time but he thinks that Barton Maughan figure of 504 men in Number 1 hold would be more accurate.

"All I can remember after embarkation into the forward hold was finding, on the steel mezzanine deck that ran around the hold, a space between a South African sergeant and a Kiwi private. It was incredibly hot and stuffy and the rhythmic beat of the engines and the slow roll of the ship made dozing almost a permanent state of mind and the time of night or day of little consequence.

"I remember a sudden tremendous thud and the "whoompf" of the torpedo bursting into the hold. The ship slowed immediately and I learned later that another torpedo had struck the engine room amidships. Looking down on the bottom of the hold was like watching a surreal merry-go-round. It was still daylight and the clear white and jade-green water was swirling around in a clockwise direction with bodies, clothing, petrol drums that had served as urinals and all sorts of gear revolving at a mad pace.

"On deck it was a scene of complete confusion. Those on the deck immediately above the hold, mainly guards, had been blown to bits. There were remains of humans hanging in the rigging and body parts littered the bloody deck. An anti-aircraft gun there was a mangled twisted piece of steel, crushed under steel deck beams which had been hurled upwards by the force of the explosion and then crashed back onto the ship. POW were pouring up from other holds and many, mainly Indians, were jumping off the decks into the sea. The red-bearded Captain of the ship, with a revolver in his hand, was shouting orders and trying to restore some semblance of sanity and discipline among his crew.

"The "Nino Bixio" was settling lower into the water but did not appear to be sinking and ropes appeared from somewhere and those that had reached the open deck were hauling badly injured mates and bodies out of the watery hell of Number 1 hold.

"One of the escorting Italian destroyers that had been circling  the "Nino Bixio" dropping depth charges through the carpet of bobbing heads of those that had leapt overboard, broke off to attach a cable to her as daylight began to fade and begun the slow haul toward the land that could be seen to starboard.

"It was a long night, but by daylight the "Nino Bixio" had been beached off Novarino Harbour in Greece and rescue teams of both Germans and Italians came aboard to supervise the evacuation of the ship. Unwounded New Zealanders and Australians were left to the last and were put to work cleaning up the ship, reeking with the smell of death. Finally, they too, were ferried ashore.

"I was dropped off with some other Australians from a lorry that pulled up at some sort of a warehouse. It had three tiers of "shelves" and I think was probably some short of drying shed for fruit. This was plentiful as it was autumn and we had been able to get some figs and tomatoes thrown at us by friendly Greeks who risked retribution by trying to get anywhere near us. I found a berth with three French Foreign Legionaires caught at Bir Hakim. We got on well. Late that night, I was called out to have all my body hair shaved off. I was given some sort of naval clothing and loaded into a lorry for Patras. I never saw my French mates again. Eventually I was loaded into another Italian ship - not a hospital one. As it happened once again I had been allotted to the forward hold and once again I was awakened from a drowse by a sudden thunderous noise. But this time it was the release of the ship's anchor chain from its storage compartment. We had arrived in Bari Harbour - "bella Italia" at last!

"We were marched through the streets to a railway station amid a hostile reception by the citizens of Bari, loaded into railway wagons and taken on a long a slow journey north.

"I have no remembrance of time, but eventually we were taken off in darkness and marched to what I later found out to be Campo di concentramento No 57 Gruppignano.

"By then I really didn't care where I was. I was lousy, weak with dysentery and had contracted jaundice. Fortunately, I was able to respond to a voice yelling out in the dark "Anybody there from Melbourne?" That voice belonged to Cpl Gordon Dare of the 2/24th Inf Bn. He had been captured in Derna in April, 1941, and was already a hardened "krigie".

"He took me under his wing despite my allocation to a different hut in a different compound. He nursed me back to health through that terrible winter and I was later to be best man at his wedding back in Melbourne."

The passenger list of ANZACs aboard the "Nino Bixio" appear in the following 4 .pdfs, sorted alphabetically as follows:

Acknowledgements and thanks to Brian Sims.