Time always hangs heavy in the hands of a POW. Even in Switzerland, where there were no barbed wire enclosed camps, where no harsh camp discipline existed, where the spectre of slow starvation had been banished, there was always the problem of boredom and a need to fill in purposeless days.

The Swiss authorities were well aware of this problem and in co-operation with the International Red Cross, YMCA, Salvation Army and other international humanitarian organisations with hands on experience of POW camps, the Swiss went to great lengths not only to adequately house, feed and nurture their uninvited guests, but in the true tradition of their biggest single industry, tourism, to make their enforced stay as enjoyable an experience as possible under war-time conditions.

The establishment of camps in such idyllic winter sports areas such as Adelboden, Arosa and Wengen, not only supplied surroundings of exquisite peace and beauty, an invigorating and healthy climate and excellent accommodation, but provided R & R facilities for POWs in less well-endowed "camps". Hundreds of "evades" were able to go skiing, mountain climbing, tobogganing and other winter sports, which most Australians had never dreamed of doing back home in their own hot, dry country. 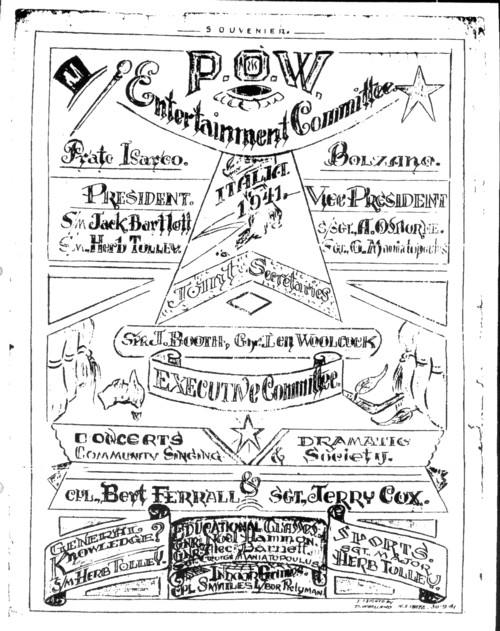 To combat the boredom of incarceration and to further the contribution to good morale brought by regular Red Cross food parcels and the mail which flowed to and from the prison camps in Italy and Australia, Allied camp leaders there had organised a bewildering range of sporting activities, concerts and plays, musical evenings, card-playing competitions, educational programmes, debates and lectures, lubricated by a supply of musical instruments, sporting gear supplied by the Red Cross and complemented by the ingenious and innovative creations of the prisoners themselves.

Cricket balls for example had been made out of the string around Red Cross parcels, theatrical props were made out of feathers, rags, tins and coloured cloth, and packs of playing cards from cigarette packets. 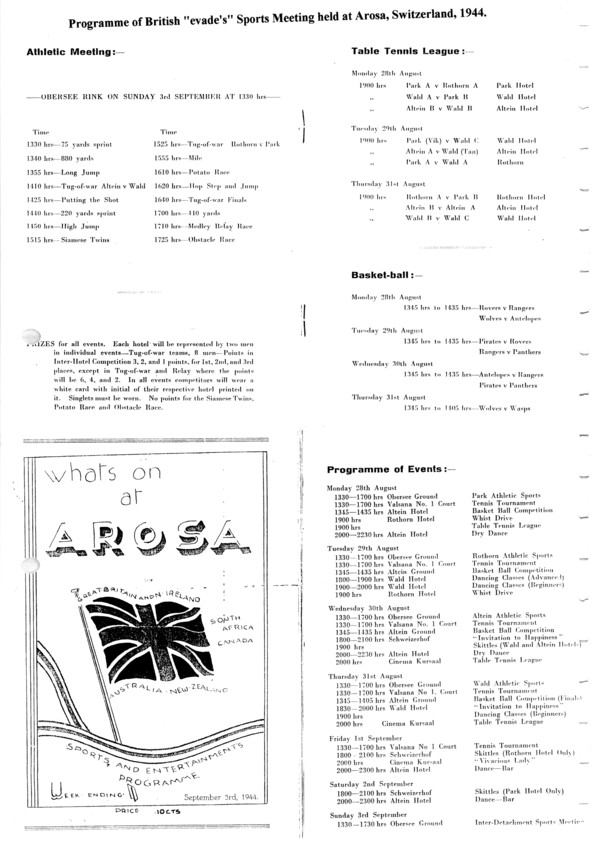 In Lt Barney Grogan's first letters home as a POW, he not only exemplifies the vital role of adequate food, and news, but also the mental stimulation of playing bridge, doing an accountancy course and enjoying his beautiful surroundings. Active participation in physical sport, and good-natured rivalry between teams from different units, even different countries, developed a feeling of well-being and physical tiredness.

What had been arranged recreation in Italian camps was raised to a very sophisticated levels in Switzerland as is demonstrated by the programme of an athletic meeting - "The Inter-detachment Sports Meeting" - held in Arosa on September 3, 1944.

"Evades" in Switzerland were encouraged to attend lectures and to give them. Capt Jack Kroger gave many public talks on Australia as did others, particularly those other ranks who had developed a flair for a language other than his mother tongue. 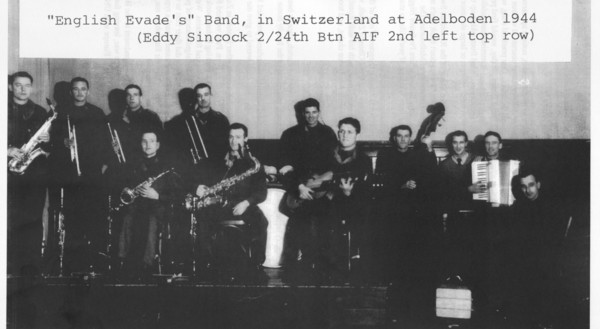 Many Air Force personnel in the camp at Glion near Montreux, honed their sailing skills on the lake after winter had retreated.

A special newspaper in English, "Marking Time", was produced for British "evades" using their own journalists, writers and production staff.

These traditions and skills were carried on in Switzerland, but instead of qualified service personnel giving lectures, within the confines of their camps, suitable "evades" were given free courses at Universities, trade courses were available to POWs who were jewellers or watchmakers, while jobs were given to bakers, butchers and other skilled tradesmen. Agricultural work was available to farmers or any unskilled personnel willing to work. Many "evades" took jobs in big hotels and in other aspects of the hospitality industry in which the Swiss excelled. 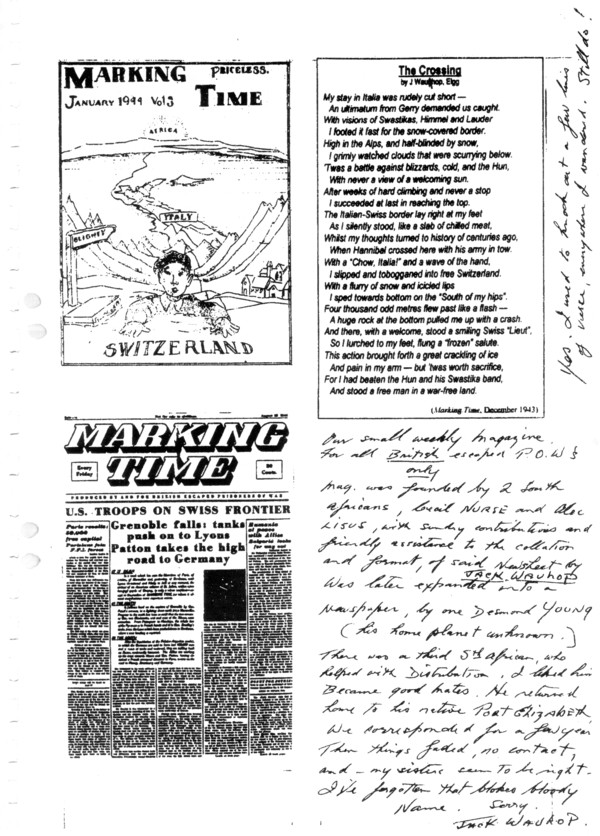 The Recorder, a geologist, obtained a job with a Swiss surveyor as his field assistant and learned a very great deal about the edible fungi growing in the mountains in which they worked temporarily with one another.

WX9786 Pte Fred Birnie 2/32nd Inf Bn, a butcher, got a job with one of the local ones in Adelboden, delivering meat to the various hotels there in which American "internee" airmen were quartered. He learnt so much about preparing meat products that he amazed his former employer in Perth when he resumed work with him after the war.