"The Intrepid Alpine Airmen - some in their flying machines" 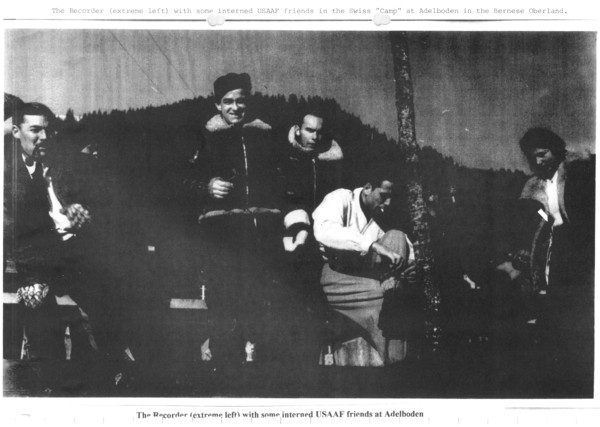 These two PDFs contains a summary of ANZAC Airmen who were POW evaders or internees in Switzerland (according to Swiss records) or in other European countries (compiled from various sources).

While most of the Australian escapers to Switzerland who were captured in the Middle East (including 4 members of the RAAF) had spent two years or so in prison camps there, the RAAF air crew that had been shot down over Europe either, crash landed on Swiss soil or were smuggled into that neutral country by various underground resistance organisations. They had not suffered long confinement and were trained, ready and anxious to resume active combat. Under the Geneva Conventions, evaders could do so, but internees could not (Switzerland was not a signatory to the Geneva Conventions).

Nevertheless, the pragmatic Swiss turned a blind eye to this distinction. Pilots were in particularly high demand by all warring air forces and many Allied pilots, such as Bob Peter, were "swapped" with Axis ones. This rid the Swiss of having to look after them.

British evader airmen were centred around the Hotel Bellevue at Glion, a ski resort above Montreux, while Australian army officers were mainly located in another famous ski resort - Arosa. In Glion both officers and NCO evader airmen were quartered together, but British internee airmen were separated in different hotels. When the commisson of Noel Davis, a F/Sgt, came through, he had to leave his hotel and friends to go to another one (but still in Adelboden) which was for commissioned officers only (see story of "R for Robert" ).

When the liberation of North West France had been achieved by the American Fifth Army and the border crossing at La Pointe at Geneva was re-activated, the Swiss made arrangements to repatriate all their British evaders through American lines, either to Grenoble or Naples. Air Force personnel were given priority. But under the Hague Conventions, which governed the conduct of neutral nations in times of war, those nations were responsible for retaining internees until the end of hostilities. (Switzerland was a foundation signatory of the Hague Conventions.)

Nearly all Allied military "internierten" (the German name for internees) in Switzerland, were American either commissioned or of senior non-comissioned rank. Many chafed under their restrictions as internees and when their military colleagues of the Fifth Army opened up the border at Geneva, the Swiss made arrangements to repatriate all their Allied evaders (including airmen so categorised who were given priority). But to "hop the border" in civilian clothes, was breaking Swiss Federal Law, and this was imposed by the Swiss with rigour, under the Hague Conventions. Those "internierten" caught hopping the border soon found themselves in Swiss Federal prisons, where conditions were a far cry from the Swiss evader camps.